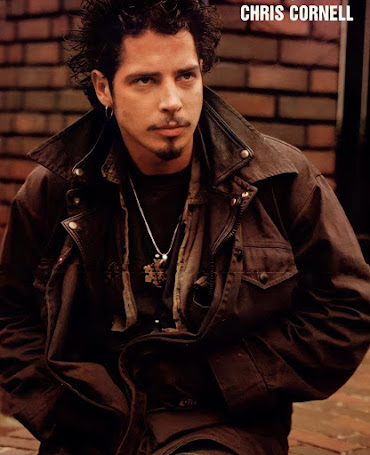 The first song of his I ever heard was “Like A Stone”. I saw the video on MTV in the summer of 2003 when I was 10 years old. This was at the height of my crazy obsession with Madonna. I very rarely listened to any band heavier than the Goo Goo Dolls. My favorite artists at the time other than Madonna included Christina Aguilera, Kelly Clarkson, Hilary Duff, and Beyoncé. Even back then, I liked the song a lot (and didn’t exactly hate looking at Chris 😂).

Fast forward two years later, I start getting into more rock and alternative music, and I heard my first Soundgarden song - “Black Hole Sun”. I was obsessed and constantly listened to it on my very first MP3 player which wasn’t even an iPod. My parents kept trying to get me to read back then and do things outside of going on the internet, so I’d frequently lock myself in my room and “read” - I was actually listening to 90s alternative music on my MP3 player, and “Black Hole Sun” frequently came up.

I always liked all four of the big Seattle grunge bands, but as a teenager discovering that music for the first time I really gravitated towards Nirvana and Pearl Jam at first. I didn’t start appreciating Soundgarden and Alice In Chains more until recently. In January 2019, on my show The Book Club, I listened to Soundgarden’s “Superunknown” album for the first time expecting it to be a decent, 7 or 8/10 record. It has since become my second favorite album of all time only behind “Jagged Little Pill”. A few months later in June I did three other Soundgarden albums - “Badmotorfinger”, “Down On The Upside”, and “Louder Than Love”, and absolutely loved all three. Between 2019-2020, Chris Cornell very quickly became my third favorite artist only behind Grace Slick and Alanis Morissette, and my favorite male artist (sorry Dio!). All of his music from Soundgarden, Audioslave, Temple Of The Dog, and his criminally underrated solo career has helped me through so much, from fallouts with toxic friends, to overcoming workplace bullying, to the recent COVID-19 pandemic. His voice is so incredible and his music just makes so happy. Any emotion you feel there is a Chris song for it. Happy? “Dusty”. Sad? “Fell On Black Days”. Pissed off at everything? “Blow Up The Outside World. Comic relief? “Part Of Me”. 😂

Over the years on the M4B board I’ve had a reputation for being very big on female artists. I have male faves but let’s be real - I’ve never talked about Oasis or Rush the way I’ve talked about Grace or Lita. Kim once asked me in 2014 if a male artist will ever be in my top 5 and I half jokingly said, “Probably not.”

Chris changed all of that.

I was getting ready for class that morning when I read the headline on Facebook that Chris Cornell died. I was so shocked and in disbelief that I shouted in my apartment at 7:30 in the morning, “WHAT THE FUCK?!?!” Whether you like him or not, you have to acknowledge and respect the big impact he has had on music and on so many people, including myself. I highly credit Chris for helping me get through the shitstorm that was 2020. Falling out with three “friends” in the same week and blaming yourself for it even though you knew deep down you did everything you could to save all three of those sinking friendships is a horrible feeling that I do not wish on anyone. I can’t say I’ve fully gotten over that and I’m still healing, but Chris’ music (and also Jerry Cantrell’s) has helped me A LOT.

Thank you so much for everything Chris. ❤️❤️❤️
Posted by jessielou910 at 7:02 PM