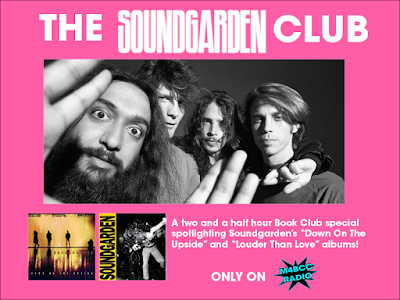 On this day in 2019, “The Soundgarden Club” aired on M4B Radio. It was a three hour special where DJ Jessica aired two new episodes of The Book Club - episode one spotlighting Soundgarden’s 1996 album “Down On The Upside” and episode two spotlighting Soundgarden’s 1989 album “Louder Than Love”. Both albums - especially the latter - got an overwhelmingly positive response from Jess, and the episode ended with Jess re-evaluating her final verdict from when she spotlighted Soundgarden in 2017 and ended up declaring them and Chris Cornell as core JessieLou artists.

Since this special aired, Jess has went on record to say that these are her two favorite episodes of The Book Club and has even gone as far to say her two favorite episodes of any show she has done. Chris Cornell has also went on to become an extremely important artist for her and is now one of her top 3 favorite artists ever, making him easily the biggest success story of The Book Club.